Many describe the Pažaislis Camaldolese Monastery complex as a place filled with mystery. Located on the northwest bank of the Kaunas Reservoir, the monastery has an extraordinary history. The Camaldolese hermits were the monastery’s initial inhabitants; they took vows of silence and slept in coffins placed in their cells, using bricks instead of pillows. Today, the complex is home to the Lithuanian Sisters of St. Casimir congregation. 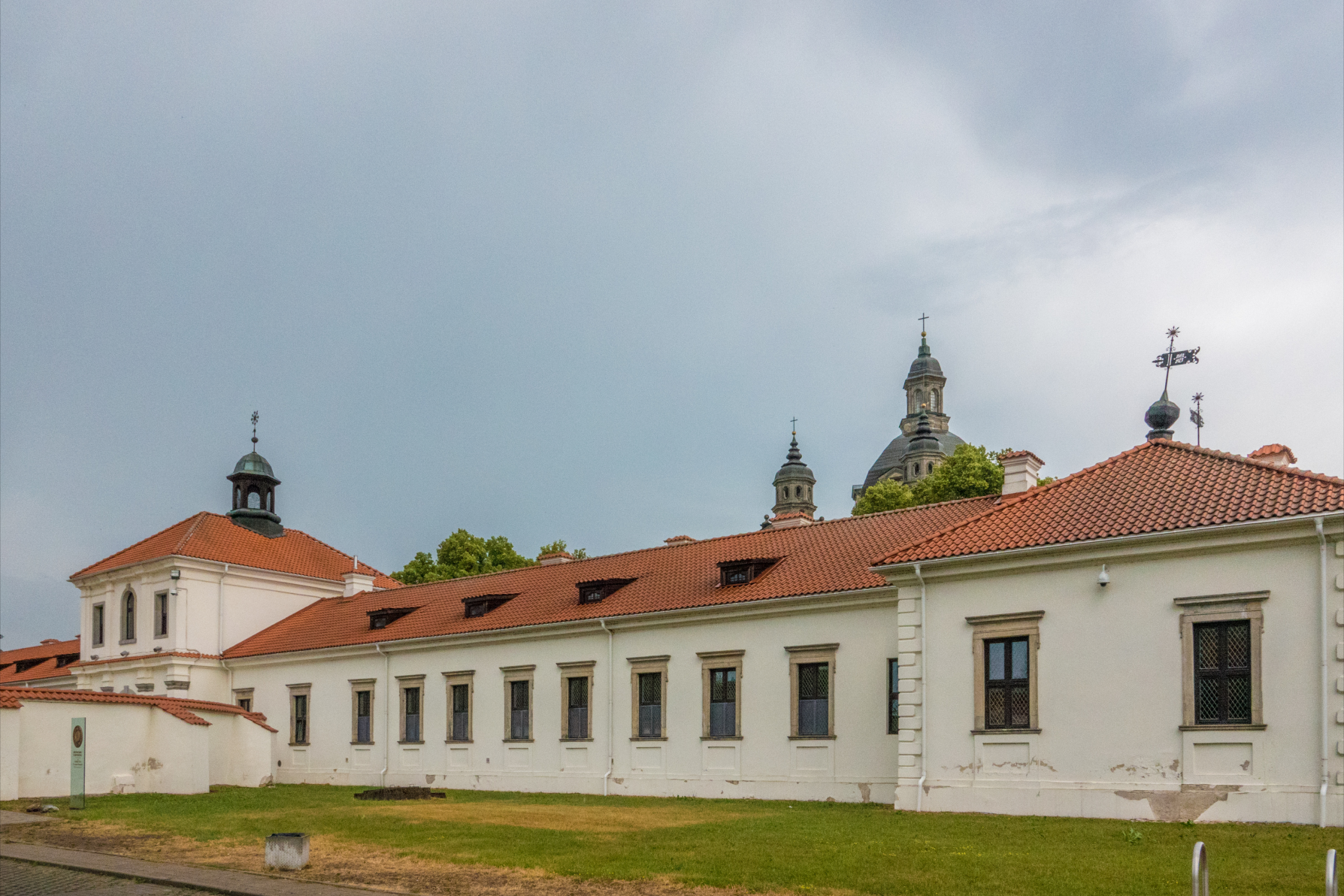 This was the first monastery of the Camaldolese in the Grand Dutchy of Lithuania and the fourth one in the Polish-Lithuanian Commonwealth. The Chancellor of the Polish-Lithuanian Commonwealth Krzysztof Zygmunt Pac financed the Camaldolese hermits. In 1664, the monastery became one of his beneficiaries and an agreement was signed between the two parties. Various Italian artists brought the Chancellor’s ideas for the monastery to life, including architect Giovanni Battista Frediani, architect brothers Pietro and Carlo Puttini (from 1674), painter Michelangelo Palloni from Florence, sculptors Giovanni Merli and Nicolaus Wulscheid, and painter Giuseppe Rossi. The decorative work was finished in 1712 and the south quarters were built slightly later, at the turn of the 18th century.

The 19th century was ruthless for the monastery. In 1812, Napoleon’s soldiers withdrawing from Russia robbed it and Tsar Nicholas I ordered the monastery to be closed following the uprising of 1831. The Camaldolese hermits were deported and the monastery’s wealth was confiscated. In 1840, the monastery was given to Orthodox monks, who decided to rearrange the church so its interior would resemble an orthodox church. That’s when all of the complex’s equipment was destroyed and replaced, and two years later a new monastery (Ėmimo į dangų) was officially opened. In 1915, the Orthodox monks fled to Russia, taking a large part of valuable art and all the monastery’s archives with them. In 1917 and 1918, the army of German Empire established a war hospital in the monastery, which is when the complex was fully ravaged.

After World War II, the monastery was used as a central state archive, care home, psychiatric hospital and tourist base. From 1967 to 1991, the Pažaislis Monastery was a part of Kaunas National M.K. Čiurlionis Arts Museum. That’s when research and restoration work started. In 1992, the complex was given back to the Sisters of St. Casimir congregation.

Above the trees of the Kaunas Reservoir peninsula emerges a 53-metre tall hexagon dome and two 32-metre tall towers belonging to the Church of the Visitation. The lower buildings can be seen from the east and the bell tower from the southeast corner above the sacristy. The entire complex is visible from far away – from the reservoir and the banks of the Nemunas River.

Today, the Pažaislis Camaldolese Monastery complex is considered to be one of the most beautiful late Baroque masterpieces in North and East Europe. Its integral and logical composition evokes a subtle harmony with the surrounding nature. A 2.5-metre tall stone wall covered in tiling separates the monastery gardens from the forest. The complex’s space composition is characteristic of Baroque architecture: impressions become stronger moving from the edge to the centre. The emotional tension of the complex rises as one walks from the Great Gates: a long path of linden trees leads to an oval square in front of the guest house. Behind it is a wide courtyard that offers a view of the main church facade and the symmetrically placed monastery buildings where the monks’ living quarters and rooms existed in the past. Two water wells can be found underneath the linden tress in the churchyard just in front of the entrance. They are thought to have been built toward the end of the 17th century but for unknown reason were buried in 1936 and restored again in 1983. The walls of the wells are made of stone and the bottom parts from sandstone, which is decorated with graceful forged metal crowns. The crowns were restored according to a rare authentic Baroque example.

All of the components of the complex are grouped in such way that one’s attention is directed to the most dominant part – the church, which draws attention to its intricate composition. It is a Baroque-style Latin cross church plan that has a hexagonal dome beginning with a lantern and a cross. A sundial can be found on the South facade. The complex’s scheme is reminiscent of the Camaldolese hermit emblem – two pigeons drinking from one glass.

The corridor of the Pažaislis Monastery next to the sacristy is decorated with an 11-painting hagiographic of St. Bruno of Querfurt. It is the earliest and maybe the only work that details the first baptism in Lithuania, which he performed in 1009. This was also the year that marked the first mention of Lithuania in the Quedlinburg annals.

Rarely in Baroque churches does the view open up to hexagon space, which in the Pažaislis Monastery is expanded by the surrounding four chapels, porch and presbytery. Light coming from the dome reveals a great view, in which the black and red marble used for modelling the interior matches well with the colourful frescos and white stucco mouldings.

The church dome features a multi-figured fresco known as The Crowning. The dome’s drum is divided into several circles or wreaths. A multi-figured fresco stretching from top to bottom is bound by three main dense bands. The top band portrays the highest of the hierarchy angels, the lower band has angels playing music, and the bottom band depicts martyrs and professors. The Crowning is painted above the bottom circle of saints.

It is said that God created angels as servants for himself and humans, and are therefore the highest form of all of God’s creations. One of the characteristics of these bodiless souls is hierarchy and distribution based on function. Therefore, angels of the highest order are almost never portrayed alone. Only when they surround God’s throne, they acquire a special meaning behind their existence. Saint Thomas Aquinas stated that angels are pure minds lacking bodies. In the Middle Ages, angels were portrayed without bodies; they only had heads with wings because our minds are in our heads. Therefore, angel heads with six wings spread in a wide ring are painted at the dome’s highest point around the hexagon lantern base.

Below that, also in a circle, one can notice an uncountable number of angels – cherubim forming a celestial choir and portrayed with curly hair and chubby faces. In some places, heads are painted clearly with two or four wings, and with bare baby bodies in others.

As for the angels playing music, the celestial soul orchestra plays various stringed instruments. They also play trumpets and other instruments, such as flutes, pipes and drums.

The saint martyrs and professors at the bottom of the dome depict 64 male and female saints. They are portrayed in the third-biggest circle, standing in different positions or kneeling on spherical clouds.

The Pažaislis Camaldolese Monastery complex is open daily, except Mondays, which is the Day of Silence. Moreover, a Week of Silence occurs for one week every year. That’s when visitors are not allowed and there are no tours. For fans of classical music, the Pažaislis Music Festival takes place at the monastery and has been organised annually from June to September since 1995.